503
May Megapost - Plans Far and Near: Hiveship, Fallen Throne, Unity, DazV5, and the Future of Aardvarkian Productions

Are you gonna release that wedding dress sometime after. Been looking for something like that, it’s perfect.

Will there be an explanation for how Liara doesn't know who the Shadow Broker is, even though she met him in Blue Star?

I know its probably an annoying and a stupid question ... but do you have got a release date for jack and Liara in mindt? i am counting the days for finally take a look on them myself q.q

show answer
×
Hit Enter to search or Escape to close

What are the chances of you making more male sfm models alongside the ladies? Like there's an abundance of the women in the market, and yours is without a doubt the best there is, but the same blank space of a guy is used and it's gotten a little stagnant

As such, until I find a better resource for male models where a lot of variety can be built with minimal resources, such as the Hitman 2016 head having something like 80 unique face textures all applicable to the same head meshes, then I don't anticipate building a new male model. Similarly, I have no interest in building specific male models, like say Vega from Mass Effect or Leon from Resident Evil, unless I have a specific project that requires them for some reason.

well ... i guess it was just a quick optimstic thought you had, when you wrote that certain response about Liara: "Heck, it is entirely possible that she'll get done as early as the first week of January." most likely it was just a short moment making you saying it, but still ... i need to ask ... are we going to do Liara on stream next week? ^_^ (wink* wink*) would be pretty cool! Just imagine a double bluestar release for her and Jack! Nostalgia for your Animation fans + super sweat happy-new-year-candy for Mass Effect Persons like me! XD

When I said it was possible, that is exactly what I mean. It was possible. There was a 1 in 16 chance that the Wheel would choose Liara, and that my texture artist's schedule would coincide such that he'd have the time to start and finish her within a week.

It's still technically possible, since the next Wheel spin will be on Jan 5. Albeit much less likely that my texture artist would have a 2-day turn-around. But it is still possible.

Happy New Year! A question, I've been porting some of your models from Source 1 to Source 2 (after you said it was ok to do on herr). The issue I found was when importing some models into Blender using Blender Source Tools the Shapekeys get all messed up. Vertices are at the wrong location. In some cases I can fit by hand but in others (Mercy Model for example) they are so many it's almost impossible. Unfortunately SourceIO isn't an option either as it corrupts the model somehow in Blender so it can't get exported to Source 2. Do you have the meshes for your models in some other format like a Blender file or .dmx? If you do would you be okay me using them for the sole purpose of porting your models to SFM2 and making the available to the community? Thank you very much.

Just let me know what models you need source for, and I can provide. Be aware that it is a nontrivial task and I won't provide a .Blend file because that just takes too much work. I also won't provide raw textures, as they are absolutely massive.

As an example, I put together and will be releasing Zelda's source for someone to port for this same reason. Zelda's compiled model is 200MB. Her source meshes were over 2GB. And that's not even including textures. My upload speed, on a good day, is 4mbps per second, or 0.5MBps. Even compressed down to 220MB (still larger than the uncompressed compiled model), you can do the math to figure out how long that took me to upload.

So if there's a model that can be fixed without much manual work, I would much rather you fix them yourself. Me spending 30+ minutes exporting and uploading a model that you could fix yourself in 5 minutes isn't terribly time-efficient.

I really enjoy your work though I've yet to look through it all, I stick mostly to D.Va and Samus because I'm a massive simp for catsuits and latex. Anyway to the question: Will there eventually be a Down the Rabbit Hole 4? I'm actually very intrigued by the story itself.

Yes. When, I cannot say. There's a convergence of massive projects going on.

The current project is Overbreed Episode 1. It is slated to probably fall somewhere between 30 and 60 minutes in runtime. This, understandably, requires a massive production time.

Blue Star Episode 4 is also slated to fall somewhere around the 30-minute mark in runtime. Again, this will take a massive production time. And now that its assets are finally coming out of pre-production, with Jack's 12-month development cycle at an end, I want to pursue it soon. It will be after Overbreed Episode 1. I may or may not do a smaller video project in between. That may or may not be Rabbit.Hole Episode 4.

Rabbit.Hole Episode 4 is less structured than the other two. While both Overbreed and Blue Star have a definitive plot, with important plot-points for each episode to hit, and a well-defined conclusion and character arcs, Down the Rabbit.Hole by design is less rigid. It isn't plot-driven, but is rather a character study - it is being designed entirely around the personality and development of Hana as a person, how she reacts to her environment. There is a vague direction in mind for her to go, but the episodes themselves are far more... fluid. As such, it's hard for me to pin down a real runtime for any given project. The episodes just do whatever feels appropriate for their exploration.

Hello, first thank you for all your models which are excellent and secondly something planned for the Tali model given the revelation of its true face with the legendary edition?

I wasn't aware this was a thing.

Ideally, I want to work with Ordagon to recreate this fan design for Tali's face. 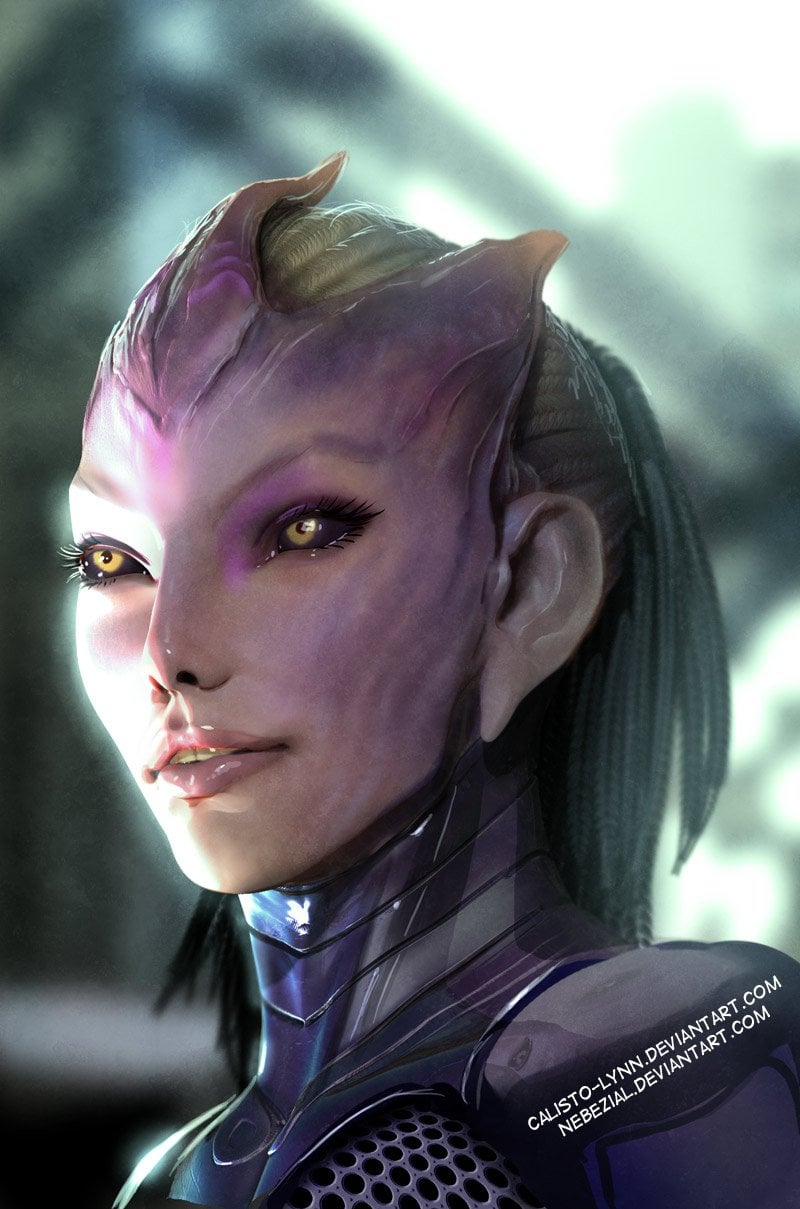 In the event that Tali gets chosen by the Wheel before Ordagon and I can figure out how to build a face like this, I will likely use this existing fan face for her: 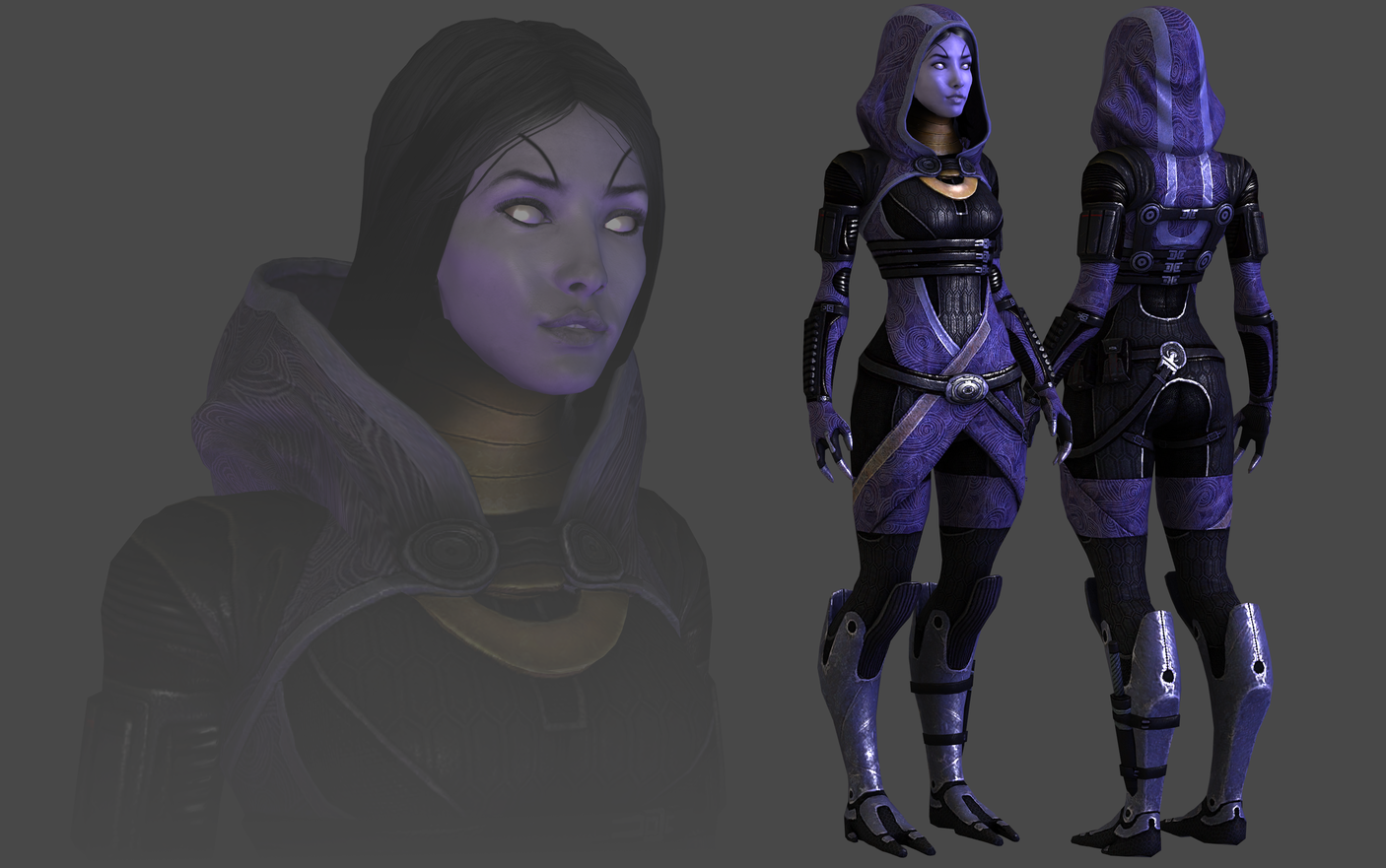 However, before her debut in Blue Star Episode 6, I very much do want that fan-design face for her. So if this version of her is made, it will only be temporary. I just looked up the Legendary Edition face, and honestly, I still prefer this aforementioned plan. 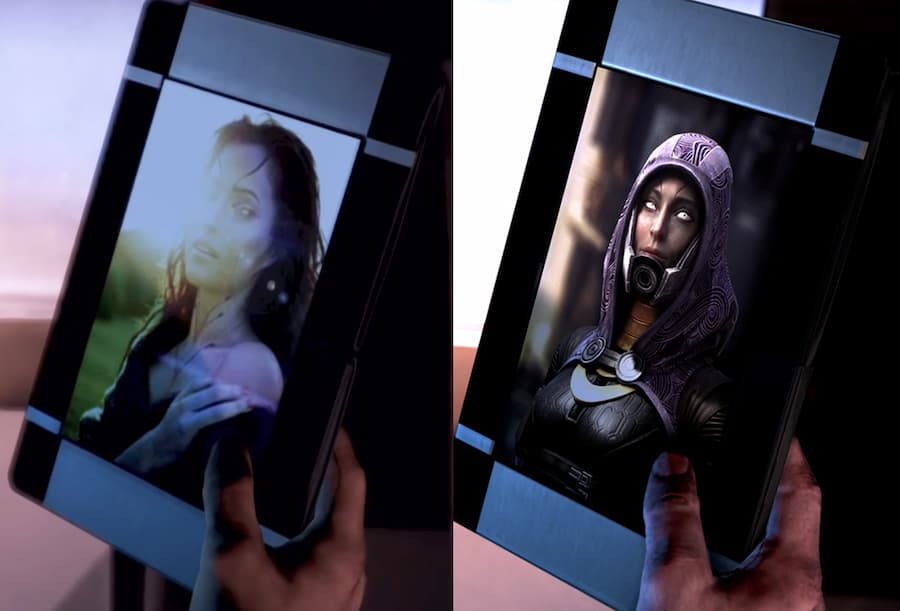 Lord Aard, what games did you enjoy playing during 2021?

Standout games that I got and played entirely too much in 2021 are Harebrained's BATTLETECH, Thronebreaker, Mass Effect Legendary Edition (no one is surprised), and Mechwarrior 5.

Games that I got in 2021 and absolutely enjoyed and thought were worth every penny are Crying Suns, For the King, Black Mesa, Road 96, and Forgotten City.

Games that I've been playing in 2021 that I got before 2021 are Fallout 4 (sue me), Slay the Spire, Monster Train, and The Dungeon Beneath.

Special shout-out for the games that I don't play singleplayer, but instead play with my group of friends: Starbound, Divinity Original Sin 2, Golf With Your Friends, Risk of Rain 2, Pummel Party, For the King, and Valheim.

Don’t mean to be that guy but could you do some RWBY scenes?

Between me not knowing a goddamn thing about the series, there not really being any models for the characters that are up to my standards, and the fact that most of the characters in the series (to my knowledge) are all underage, probably not.

I can't wait for Jack to be released. As well as Liara, it did make me wonder if she'll come with new outfits since Chakwas has a similar outfit to her in the first game. But another character I hope gets an update at some point is Nualia, she's easily one of my favorite models you've made since she is your own character. The last thing I'll say is actually a bit of an idea for a video, I thought it would be interesting to have a short where a character has the ability to change her own body (whether it's a superpower or science experiement or even an accident) to seduce others, it could also lead to some comedy too with her losing control of it (for whatever reason I mostly think of it as part of that Liziverse series), I also consider it a good way to test out any bodymorphs you do. Keep up the incredible work! Can't wait for what comes next!

Liara will be built to canon. In fact, she'll probably just end up using Chakwas' body since Mass Effect characters are extremely homogenous in terms of body-shape, and as you said, Liara and Chakwas wear the same exact outfit (sans a color swap) in Mass Effect 1. As like Zelda, Liara will also have a Curvy variant.

As to Nualia, she's been in the shop for a long time. And she will likely remain for a while longer.

Fallen Throne is my largest original IP, and I have plans to eventually properly monetize it. As such, it needs to be stripped of all IP infringements and be entirely original. The major obstacle to that right now is hair and outfitting. Ordagon and I are slowly building up the toolsets and skills to be able to give characters entirely unique hair and outfits, built from the ground up, with the level of fidelity that Fallen Throne deserves. It's difficult finding the time to do that with our existing schedules.

Amazing how close Jack finally is for her release! Can´t wait for her! The only question left is: has that model a no hair bodygroup for the classic ME2 Style??

Unfortunately, it does not. Jack's hair is baked onto her head mesh. To get a no-hair version of her would require building an entirely different model, using her ME2 head. I have no such plans.

Hello L.A. Just another short ME question. If Liara gets her next model 2022 ... you think you will include a working Glyph prop model for release? Would be sweet if it´s part of it. Anyway happy holidays and a good start into the next year! Btw. Wheelspin next Wednesday will happen? If so ... Exciting to have 1 last spin! I´d like watching stream :D

Now that Jack is finally done, Liara is next in line to get into the shop! Wolves and I anticipate that she won't take nearly as long as Jack did (blue tint and scales is a lot less complex that densely-packed complex-design head-to-toe tatttoos, after all). Heck, it is entirely possible that she'll get done as early as the first week of January.

I can totally do a Glyph model, assuming someone reminds me to do it, and I can find his mesh and textures.